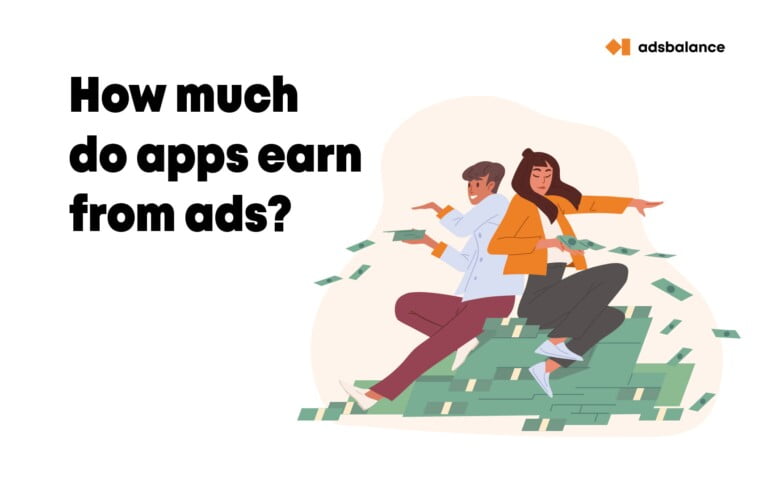 How Much Do Apps Earn From Advertising?

Monetizing your app – it’s the ultimate goal of many app developers. A lot of hard work and money are invested into your app, so it’s natural to look forward to the reward you might get for all that you’ve done. While you shouldn’t make your whole app about monetization, it doesn’t hurt to do a little research on it and know more about it. There are many questions one could pose about monetizing their mobile app, but the biggest question is always, how much DO apps earn from advertising?

With that being said, let’s start off with some of different models of monetization you can go with.

The first distinguishing category is paid vs. free apps. If you charge a fee to even download your app, you will make money any time someone installs the app. This can bring in a nice stream of short-term revenue, and works well if you already have an established base that knows and trusts your product. Being a paid app is also advantageous if you know you would lose revenue from in-app payment methods. Being a paid app is not viable for most apps though, as many people are less likely to click download if they have to pay for an app.

A category usually represented by content and/or service providers. From copyrighted content like music (Youtube Music, Spotify, Pandora) and movies to own media (The New York Times who, of course, have a desktop subscription option as well) and know-hows/own methods for popular services, like the new meditation approaches by Calm or Headspace.

If your app is free to download, then you have a few other options for how to make money off of it. Depending on your app and what you offer to your users, certain models may work better or worse.

In-app advertising is the most popular way to make money from your app. We’ve all dealt with in-app ads before, when you have to wait out a short ad or click out of a short ad in order to access a new feature or a new level. It’s the ultimate win-win, users get to use the app for free and developers make money off of advertising. Bonus points if the ad actually works.

There are a multitude of different in-app ads that you can have, and which type you choose depends entirely on your app. The ads are more effective and less likely to lead people to delete your app if the ads function well with the UI and aren’t super disruptive to the app.

If you don’t want to offer in-app advertising, take a look into data monetization next, especially if you have a large user base. Data monetization is exactly what it sounds like, making money off of data. Any time a user interacts with your app, data is formed. You can collect, anonymize, and sell this data to a data collector such as advertisers or marketers.

Data monetization is used in many industries, and in the app industry, it’s a way to make money off of your app without bothering your users or disrupting your UI with an annoying ad. Many collectors look for this data because it can provide valuable insights on consumer behavior.

Advertisers want to reach their target audience, and you could make money by connecting them to that audience. Now imagine you could connect that audience to a wide range of advertisers. Ad networks do just that. They connect your app to large databases of advertisers, effectively achieving the aforementioned goal. But why go with only one ad network? You can maximize revenue by using several ad networks. All you need to do is join an ad mediation platform, which allows you to connect to several ad networks at once.

Game apps are responsible for the rise of this specific monetization model, as this model is perfect for many mobile games. In-app purchases are simply purchases made inside the app that usually unlock a new feature or give the user some advantage they did not have before. In-app purchases are a great way to monetize a game app, especially one that can sell users items they will need to progress in the game. It’s a great way to make money and incentivize users to play more, but obviously is not the best choice if you can’t intuitively add in-app purchases to your application.

While these are not all of the available monetization models out there, they are the most popular. Whether it’s making your app a paid app, monetizing the data of your vast user base, or just going the advertisement route, there is a model for every type of app that works with the app’s structure and UI.

When it comes to app monetization, mobile games provide some of the most lucrative opportunities. In Q3 of 2020, mobile gaming’s share of all app revenue was at 72.3%, showing that while other apps make money, games make the majority of it.

How Much Do Paid Games Earn?

Almost every mobile game is monetized in some way, because it’s the only way most of them make money. But just how much money can be earned through a mobile game? Taking a look at some of the statistics may surprise you.

It’s true that the majority of the highest-grossing game apps make most of their revenue through in-app purchases. But that monetization model does not suit every mobile game, and other methods could prove to be more lucrative for your own app based on it’s individual features.

Game app revenues have risen every quarter in recent years, and by Q4 of 2020 gaming app revenues hit an impressive $21.8 billion. In a matter of 4 short years, mobile gaming revenue has risen from just $8.1 billion to over $20 billion. Who knows how much more this number could rise?

Apple’s App Store still beats the Google Play Store in every quarter, on average garnering about $4 billion more dollars in revenue every quarter. Androids generate about 60 to 70 percent of the revenue iOs generates, but this can be attributed to how popular iOs devices are worldwide. Unfortunately for Google, it doesn’t look like they’ll be catching up to Apple any time soon.

The statistics don’t lie, and it’s easy to see that mobile gaming is here to stay. In all quarters for the past few years, revenues have been increasing. New heights are reached each quarter, and there’s no telling when it will stop. Mobile gaming is a billion dollar market, and is projected to only keep growing.

Armed with this knowledge, monetizing your own gaming app should be a no-brainer. The industry is still booming, and it’s likely to continue to be a lucrative one for years to come. We’ve already discussed how in-app purchases can bring you a lot of revenue, but it’s not the only form. The most popular monetization scheme by far is in-app advertising, because it’s one of the easiest to integrate into nearly any app, especially a gaming app.

How Much Can In-App Advertising Earn You?

If we look at the Business of apps stats, we will see that overall worldwide app revenue grows every quarter and has reached its highest in Q4 ($31.9 billion dollars), the overall revenue for 2020 being the impressive $111 billion dollars.

An ad unit is an ad that developers integrate into their apps in order to monetize their traffic. There are different types of ad units and each one looks and behaves differently. Some of the most popular types include:

Banner ads: Banner ads are usually a picture that occupies a spot in the app’s layout. You usually see these at the top or bottom of your screen while in an app.

Interstitial ads: Interstitial ads are full-screen ads that pop up at natural pauses in an app’s flow, they usually offer the option to exit and skip. These ads are customizable and ensure minimum disruption to user experience and at the same time maximize app revenue.

Rewarded Video ads: Rewarded video ads are just like they sound, they offer users in-app rewards for watching an ad. This ad type is a win for every party involved, user, developer, and advertiser, because users get free in-app content, developers make money off of the ad, and advertisers enjoy increased viewability and high click through rates.

Playable ads: Simply put, ads that you can play. This ad type allows users to pay a game for up to a minute, offering them an enjoyable experience and the opportunity to try the game out. At the end they will see a call to action.

Each ad unit offers users a different ad experience, so it’s important to choose an ad unit that flows well within your app’s own UI. If your app doesn’t have natural breaks, interstitial ads might make the user experience awkward and not intuitive, leading users to either not use your app or uninstall it completely. Rewarded video ads only work if you have rewards worth earning. If your app doesn’t have a structure that supports that, those kinds of ads might not work well for you.

According to Iron Source, the average revenue per impression for rewarded video ads is $0.02 and the average revenue per completion for interstitials is $0.16. As previously stated, one ad type might work better for your app’s specific UI, but the best ad experiences offer a wide range of mobile formats. So consider several different ad types that work with your app.

How an ad is priced also affects your revenue. Pricing models for ads fall mainly under 3 categories, each requiring more action from the user than the last before the advertiser pays for the ad. Typical ad pricing models include:

CPM – Cost per mille, which is cost per 1,000 impressions. It’s one of the original and most common ways to pay for mobile ads.

CPA – Cost per action/cost per acquisition, the advertiser is charged only when the user has not only clicked on an ad, but also completed a designated action, such as downloading an app or signing up with an email.

The more action required of the user, the more the ad pays per click or action, but getting a user to click through is not always a simple task. Your ad pricing model can affect your revenue, so choose one that works best with the types of ads you can offer on your app, as well as what your user base is likely to deal with.

The amount of revenue you can generate by offering ads on your app depends on several factors, including the ad units you offer, your cost per model, and your user base. You don’t always need a large user base if yours is very active. So maximizing your ad revenue potential is very specific to your app.

So how much can in-app advertising earn you? Well as we’ve stated, the true answer is that it depends. You have to find what works best with your own app, so that the ad experience doesn’t disrupt the user experience too much. If you’re unfamiliar with this territory, integrating ads into your platform might not seem like an easy task with so many details to pay attention to.

We at Adsbalance do not provide you with app monetization services (though we might help you if you need some recommendations and market insights). We have first hand knowledge of app development (through our other projects) as well as extensive marketing knowledge that we combine to help you achieve your revenue goals. So don’t hesitate, contact us to reach your revenue goals: we know how to bring installs that make change:)