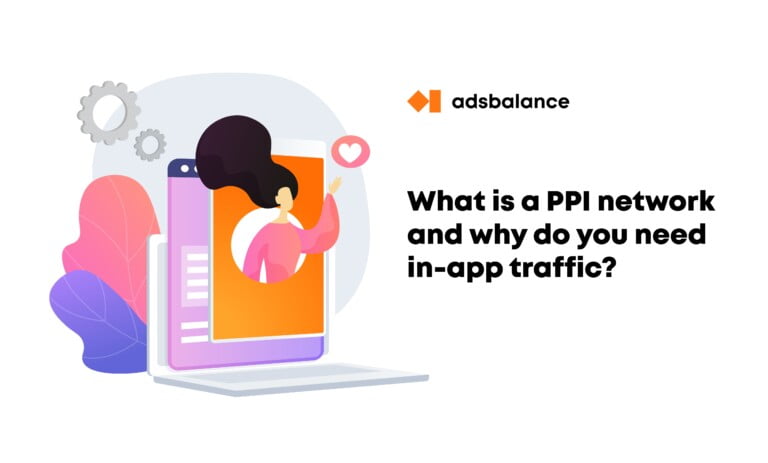 By this article, we start a series of texts on how the mobile advertising market works and what we and the likely companies do on the market. We’d like to start with PPI/CPI networks, for instance, mobile (in-app) DSPS.

Cost per install (=pay per install) advertising is an instance of a wider notion — cost per action, or CPA advertising. This is a model where advertisers pay traffic sources (mobile, for instance) for driving traffic to make users perform specific actions, in this particular case  — installs, and the price is set beforehand and usually fixed. Sometimes this price may vary, but we will get back to this a bit later.

What are the traffic sources that do pay per install advertising?

First of all, we must mention that, in general, many of the traffic sources mentioned offer various buying models, including CPM (cost per mille — 1000 impressions), CPC (cost per click), CPE (cost per engagement), and so on, but CPI (PPI) and CPC are the most common ones.

In fact, we are going to talk about programmatic advertising that is a whole advertising ecosystem whose number of components may vary depending on the complexity.

Since we are a mobile agency so we are going to base our explanation on in-app advertising networks.

The programmatic advertising “chain” starts from a user who watches an ad while interacting with some content. The content is provided by the publisher (here it’s the app owner who has an ad SDK built into their app), to the publisher “owns” all the ad impression slots his app produces.
As soon as the publisher sees they have a new ad impression to sell, they send the corresponding info (ad request) to the SSP (supply-side platform) that aggregates the traffic from many publishers. 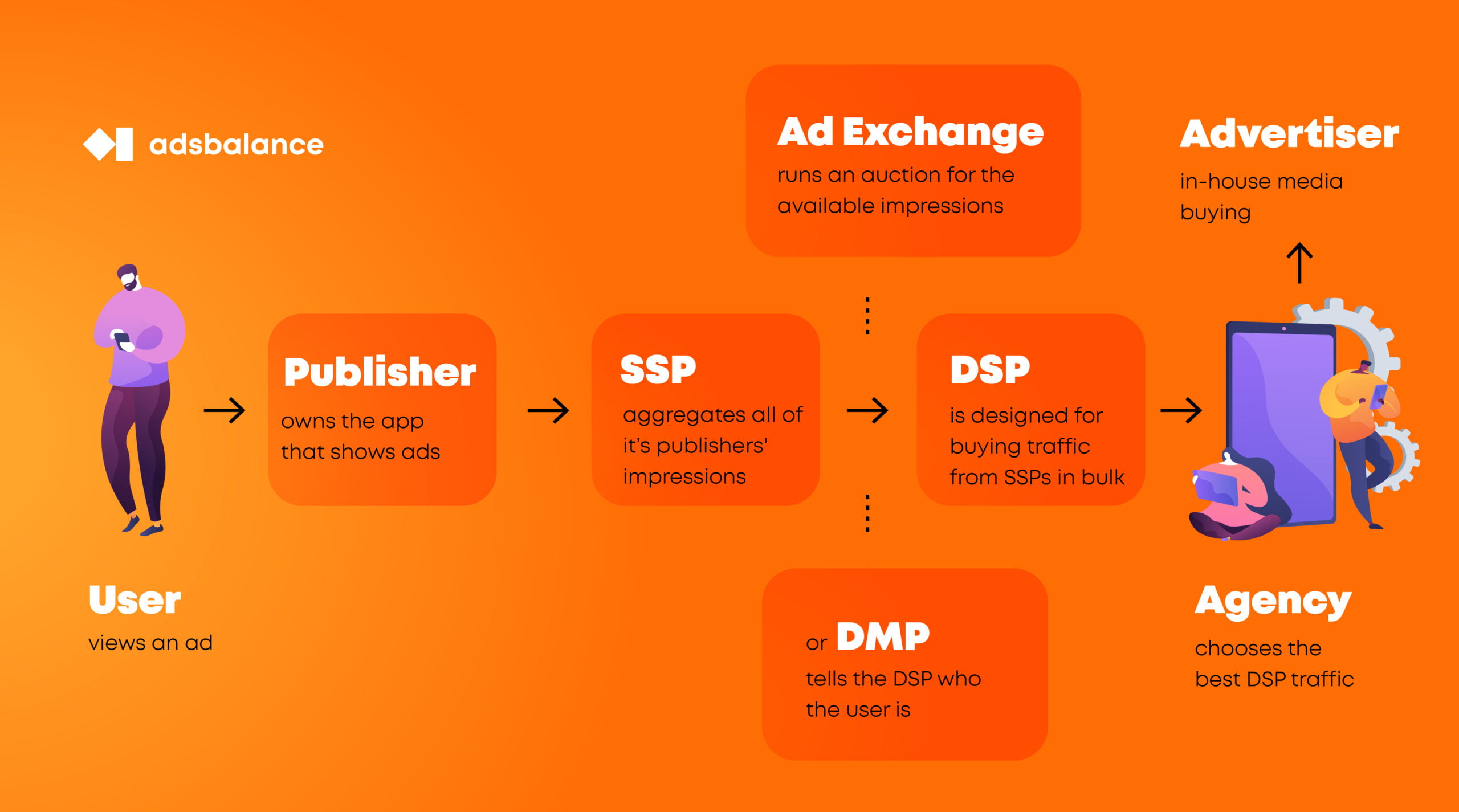 An SSP might send (=sell) the traffic to an ad exchange. An ad exchange is a place where advertisers or DSPs (demand-side platforms) take part in an auction for each user’s impression. The exchange uses the built-in DMP (data management platform) or a third-party DMP to define the user’s demographic characteristics (age, gender, income, interests, and many more) by matching the available info with the info DMP has “in store”. Then the competing parties place their maximum bid for the users. The winner shows the ad, and the price is not necessarily the highest bid, it’s the next highest price. That’s called the second price auction, a very popular approach to pricing in many advertising networks.

However, this chain might skip the Ad exchange part so that SSPs sell their traffic to DSPs.
DSP is a place which, in turn, aggregates many SSPs so that advertisers do not have to sign contracts and do integrations with every SSP on the market. It is a one-stop-shop for buying (mobile) traffic for a great number of publishers. The DSP is responsible for dealing with SSPs and, somehow, for their traffic quality and the stability of supply too.

Many of the DSPs nowadays optimize the selling process so that for the comfort of advertisers they are able to work on a CPI model.

Again, some enthusiastic advertisers who have their own in-house media buying teams try to work with DSPs directly, but mostly they refer to the dedicated CPI/CPA advertising agencies, who, in their turn, have contracts with a select number of platforms/networks and take care of the performance and traffic quality.

What’s left here in this chain?  Digital advertising is a place where the best minds of the scammers from all around the world try to fake real users and make DSPs and brands pay for non-human traffic, which is called ad fraud. In fact, there is a great variety of fraud types not necessarily associated with bot traffic, like click hijacking, but this is not the right article to get into details. It’s enough to mention that it’s a huge problem fought with relatively successfully.  Another thing is the stats. As one of the articles the author of this stumbled upon while trying to google media buyer jokes says, “Since I first started toiling in the web trenches in the late-’90s, the false promise of digital has always been measurability and accountability”. Even though everything is operated and calculated by powerful networks’ backend stuff, all of the networks “brains” might have a bit different notion of anything from impression to install.  That means discrepancies occur every now and then, so one day they decided to refer to a third-party system, a trusted mediator between all of the participants of the chain. Those mediators are called analytics platforms, and we do not know a company in the market that does not use such platforms. The most popular analytic platforms are Adjust, Appsflyer, Kochava, Tune. Most of them, the paid ones, have special anti-fraud add-ons, and there also are “full” analytcis platforms that can be used for for internal analytics and product development like Google’s Firebase.

Here we can get back to the core of the article — the PPI mobile DSPs. In general, DSP is what happened to advertising networks with the development of technology. Some say DSPs are ad networks too, some write posts on how to tell one from another.

To start from the beginning, we’d like to mention that DSPs are called so because they operate to serve the “demand” (i.e. advertisers’) needs, they are designed to make the advertiser’s life easier, not the app owner’s or ever user’s:). DSPs are meant to have as many SSPs integrated as possible: in a perfect world you would only use one DSP to rule all of the needed traffic.

So how does this work/How do you work with a DSP/ CPI network?

A media buyer walks into a bar..(alas, much to our chargin such joke hasn’t been found). A media buyer (inhouse or agency, doesn’t matter) enters a DSP.
They have a budget, target CPI and the idea of the advertsed product in mind. They create a campagin:what you really need is creatives, the rest might be defined experimentally.

So when you set up a campaign in a pay per install network you keep in mind that you can use the following targeting options:
Contextual

There, again, sometimes is a choice between in-app and mobile web, but all of our preferred and most efficient traffic sources are in-app (at least when we speak of the ad networks, social traffic does not count). Anyway, this all might sound very appealing and may lure you into using all of those setting at once. Don’t. The location, devise and OS are crucial because they can tell a user if his device is fit for using your app. The rest’s stable work is not guaranteed since  not all of the DSP gather mobile data well enougn.

We’d even say that who owns the black and white lists for the networks owns the success of the campaign, and just having them fresh and upfatedi.

If you don’t have them, refer to an inapp traffic buying agency, they usually have the optimal DSPs for the vertical and all kinds of exclusive and inclusive publishers lists, or you can take knocks and learn on your own.

After that you choose your target CPI, which is rather a price you’d like to achieve, a price that occurs after the DSP buys publishers’ traffic with a CPM model and sees if that’ possible for them and profitable to them. So it is more correct to call it eCPI, because it’s the final, resulting price.

(Then the dates and time, etcetera, and then you’re all set up. If a camoaign does not have or does not have enough impressions or installs, that means the DSP somehow thinks that your ads are not liked by the audience you chose, rather buy someoe else’ knocks. By this we imply that DSP has a sort of value for all of the campaigns and placements they have and they judge those campaigns by their engagement rate and eCPIs. So the best thing you can you is make the targeting less precise and/or change thee creatives.

Was this article useful for you? Did you learn anything new about PPC/PPI or ad tech in general, or do you know all of the things mentioned by heart? We’d love to hear your suggestions on what might be added here.